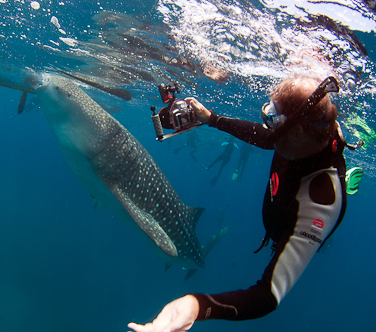 I began my foray into underwater imaging in the early 2000s shooting video. I had a Panasonic PC-100 camcorder which I housed in a Light and Motion Mako underwater housing. It was a nice, compact setup that was easy to travel with and took very nice video. After a trip, I’d come home with hours of video, and spend hours and hours and hours and hours editing to come up with a 15 minute representation of the trip. I never knew if I was doing any good, because I never got any feedback. Nobody could be bothered to view my productions and tell me what they thought. And YouTube, Vimeo, and other web sites weren’t there yet. So, after a while, I figured enough was enough and shelved my movie making career.

From then on, I spent my hours underwater watching Linda do her magic, poking around, trying to find interesting subjects for her, and so on. Then I began to think that ‘as long as I’m here, I may as well have some kind of a camera in my hand, because you never know what might happen along’. In 2010, on our 1st trip to Ambon, on our 1st dive, Linda’s new Athena Ring Flash died. We spent 10 days diving in one of the most productive macro image areas in the world, and came home without a single image. You cannot imagine the grief!! That sealed the deal for me and I began to search in earnest for a camera for me.

In the Spring of 2011 I came across a used 1st generation Olympus Mirrorless camera setup at a very reasonable price. Actually, it was more like a steal. I got the camera, lens, housing & port, tray with handles, and, best of all, 2 Inon Z-240 strobes for $500. I say ‘best of all’, because in the back of my head I was saying ‘next time Linda’s Ring Flash craps out, I’ll have backup for her’.

My current setup consists of an Olympus OM-D E-M1 with a 60mm macro lens, Nauticam NA-EM1 housing and 2x Sea & Sea YS-D1 strobes. I also use a Nauticam CMC-1 magnifier.

I primarily shoot macro and have referred to my photographic prowess and style as being comparable to the monkey with a typewriter. To wit: If you give a monkey a typewriter, eventually, he will type a word. Ergo, I got me a camera and hoped to eventually get a picture.

So, with that, I titled my gallery…. The Word.